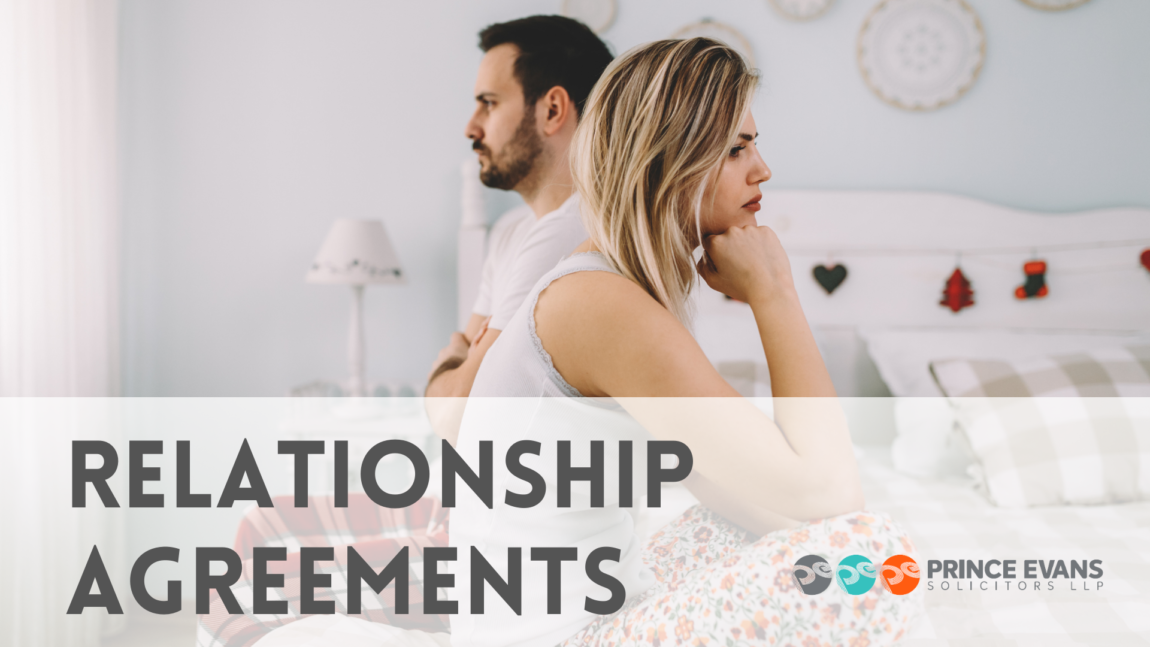 If you separate, whether as part of a married or cohabiting couple, you will want to deal with financial matters as quickly and as cost effectively as possible.

The best way to achieve this is to have an agreement in place which says what will happen in the event of your separation and our experienced family solicitors at Prince Evans can assist with this.

The various family law agreements set out what will happen if the relationship ends, leaving both you and your partner in no doubt about what will happen. This can save you thousands of pounds of costs and also result in a much more amicable separation. This can only be of benefit to you both and any children you have. It is a win-win.

A cohabitation agreement can be entered into at any point once a couple decide to live together. It is a particularly useful document where one partner may be contributing more towards the purchase price of a property they live in together, may have more assets and may be paying more towards the mortgage and monthly bills. Many people argue that the law does not currently do enough to protect unmarried couples and that people can be left financially vulnerable if a relationship ends. There is no right to maintenance or a presumed right to a share of an asset as a cohabitee, which is much more likely to arise if you had been married. If you have been living together, the Court will be looking at who paid what, for what purpose and with what intention in mind. As you can imagine, after a long relationship, working out who paid what is a difficult and time-consuming exercise. A cohabitation agreement setting out what will happen on separation means that you will both know what you would be entitled to receive from the outset and arrangements on separation are much simpler.

If you manage to reach an agreement regarding financial arrangements with your husband or wife after separation, whether by direct discussions with them or via mediation, our solicitors at Prince Evans can assist you with drafting a consent order setting out the terms of this agreement. This will be in a format which is accepted by the Court and the agreement can be sent to the Court for approval at any time after the first stage of the divorce, the Decree Nisi, is pronounced. Even if you have modest assets such as savings, it is still always worth the cost of entering into a ‘clean break’ consent order as this alone will terminate your spouse’s financial claims against you meaning that neither of you can claim against each other for any reason in the future. Otherwise your former spouse’s financial claims remain open against you, for example if you receive an inheritance or lottery win.

Your divorce itself does not achieve this-only a consent order can.

However, after separating, financial security and certainty can be a worry.  Entering into a separation agreement can deal with some of these worries as it can set out your intentions regarding the division of property, investments and any debts. The agreement can also deal with maintenance and how household costs will be met.

Ideally, to have the best chance of being approved later on by the Court as part of the divorce, both spouses will have sought legal advice before signing the agreement (or been encouraged to do so) and there should be a sharing of financial information so an informed decision will have been made about the terms.

A separation agreement is not sent to the Court for approval but is a contract between the couple. The terms can then be incorporated by a solicitor into a consent order to be sent to a Judge for approval after Decree Nisi as set out above, and their financial claims against each other can then be finalised.

Agreements Before or After Marriage

Prenuptial agreements are usually put in place before a couple gets married, ideally at least 4 weeks before. These contracts deal primarily with how property is to be divided in the event of a separation or divorce and can say for example that any money or property you bring into the marriage is yours to keep on any separation or divorce. Likewise they can stipulate that any inheritances or gifts received from family is retained by you individually. You can also include that if you contribute more financially to joint assets purchased during the marriage, this will be reflected in the divorce settlement. Pre-nuptial agreements can also set out how property and finances are to be managed during the marriage and can provide for a review, if agreed, after the birth of a child or after 5 or 10 years has passed.

These agreements are not currently binding on an English Court in the event of a divorce. However they are certainly persuasive as one of the factors to be taken into account by the Court, especially there has been financial disclosure, you have entered into the agreement freely and without duress and you have both been represented by solicitors at the time of entering into the agreement.

What are the benefits of having a family law agreement?

There are many benefits to having a family law agreement such as:

Contact our family team today on 020 8280 2710 to discuss making an agreement tailor made to your circumstances, priorities and needs.