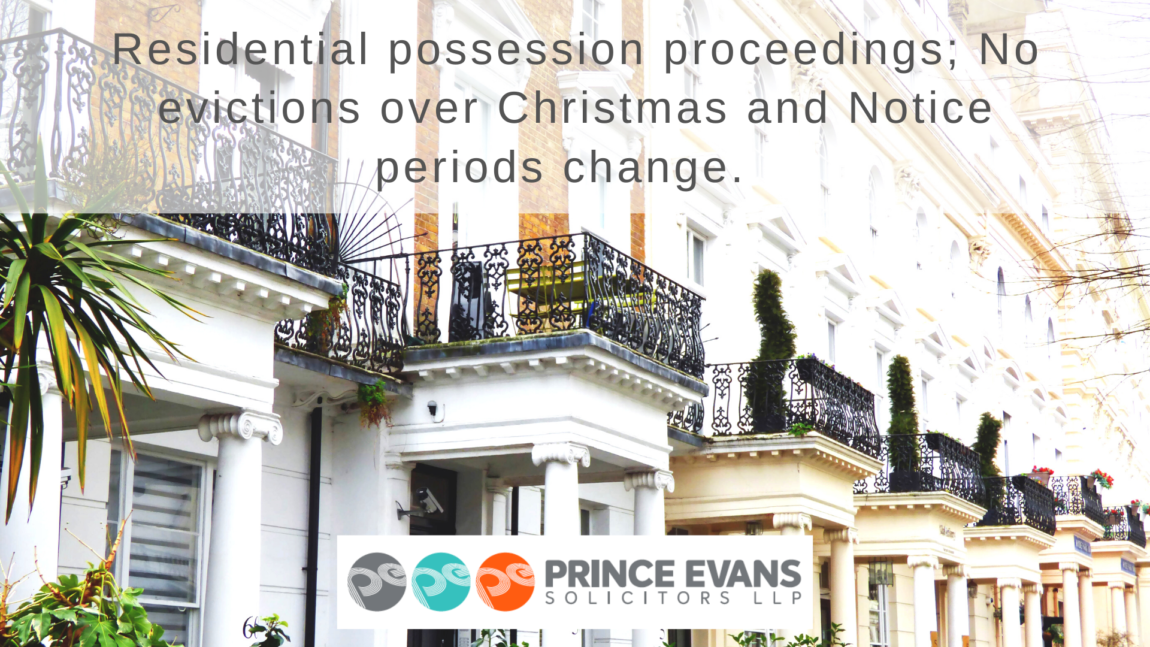 Housing Secretary Robert Jennick announced on 11th September 2020 that there will be a “truce” on enforcement action for tenants facing eviction in England and Wales over the Christmas period.  He has also said evictions will not be enforced in areas subject to local lockdowns.  Bailiffs will be told that they should not enforce Possession Orders over Christmas other than in the most serious circumstances such as Anti-Social Behaviour and Domestic Abuse.  The dates affected have yet to be announced.

Although this is a further restriction on Landlords obtaining possession of their properties, in practice Bailiffs’ appointments have generally not been arranged for the second half of December and the first week or two of January for many years as previously the Courts received numerous applications for stays of Bailiff’s Appointments during December to avoid evictions taking place immediately before Christmas .

With Possession proceedings not being dealt with or heard before the 20 September 2020, a substantial backlog of cases already in the Court system and numerous new cases anticipated to be filed after 20 September to reflect the increase in rent arrears, a substantial period time is likely to pass before possession proceedings applied for after 20 September 2020 will reach the point of a Bailiff’s Appointment being set, probably in 2021 at the earliest in any event.

The Government and the Courts have re-visited the Coronavirus Act 2020 (Residential Tenancies: Protection from Eviction)  (Amendments) (England)  Regulations 2020 with regard to possession proceedings following pressure from landlords to vary the three month notice period applying to almost all possession proceedings.

The changes described below came into effect on Saturday 29 August 2020 and will remain in effect until 31 March 2021, although there may be changes in the future.

Changes include the following:-

Notices served with the correct notice period at the time of issue remain effective and do not have to be reissued but proceedings relying solely on a s21 Notice must be issued within 6 months of service and if a new s21 notice now has to be served the notice period is 6 months. .

Please also note that if a tenancy has a Break Clause allowing for example a Landlord to serve two months’ Notice after the original six months of the tenancy,  the statutory provisions override the contractual provisions so if the landlord has to give two months’ Notice ( by way of a Section 21  Notice ) under a Break Clause, the Notice period is now six months under the Regulations, not the two months expressed in the tenancy.

The overall effect of this is that if there is a six month tenancy a Section 21 Notice cannot be served within the first four months of the tenancy. The Notice can be served at the beginning of the fifth month but will last for six months so that in effect the minimum period of any tenancy will now be ten months before proceedings can be issued.

In any possession proceedings the landlord Claimant will have to obtain and provide details of the effect of the Coronavirus on the tenant as part of the Application process.

With secure tenancies, there are similar provisions. Under Ground 1 of Schedule 2 of the Housing Act 1985, if there are 6 months arrears or more, then the notice period is 4 weeks (where no other Ground is specified), otherwise the notice period is 6 months. Whereas for Ground 2 (anti-social behaviour), court proceedings for possession can be begun immediately. Please feel free to contact Erika Barnett if you have any queries in relation to secure tenancies.

If you have any queries please do not hesitate to contact us.

Update on the Government’s “Winter truce” when bailiff’s appointments will not take place.