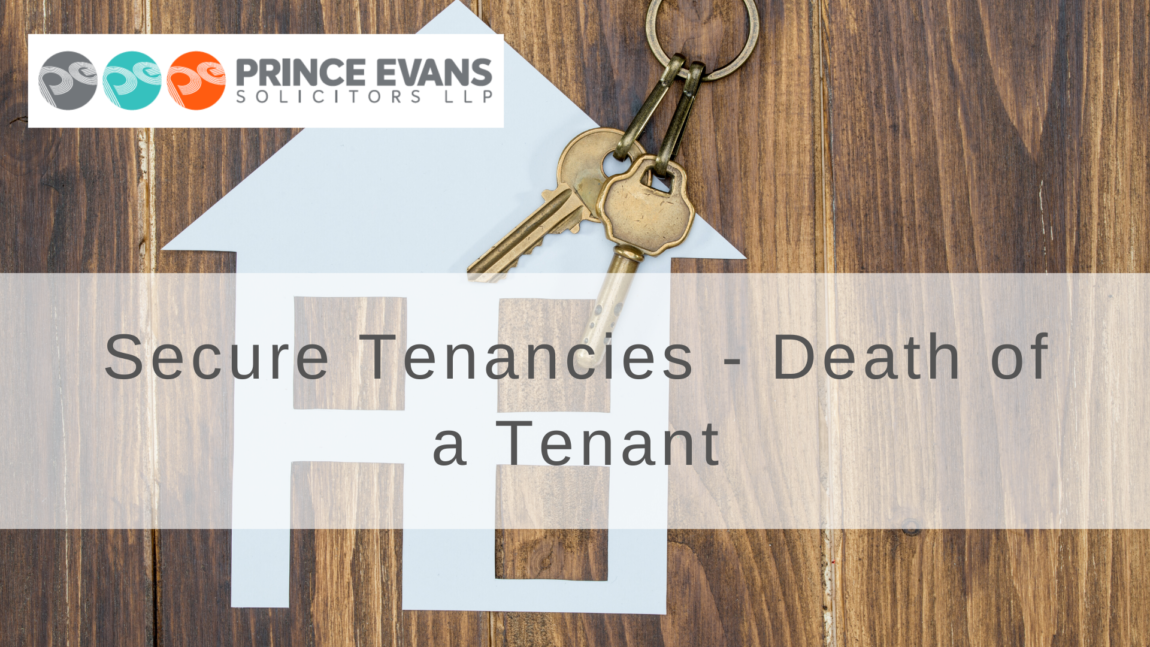 Secure Tenancies – Death of a Tenant

There are a few factors for a housing officer to consider when a tenant passes; this will include making enquiries as to who remains in occupation of the property and whether they have any rights to succeed under statute, to succeed under the tenancy agreement or possibly any discretionary succession rights. This will involve understanding the relevant law and considering the tenancy agreement terms and conditions carefully.

It is also important to consider any policy you have in relation to succession, as this will often provide a structure of how to liaise with the occupier/ potential successor. The policy will usually provide that the occupier be permitted to make an application for succession and be informed of what evidence they will need to provide to prove that they meet the criteria i.e proof of relationship to the deceased and documents linked to the address. It is imperative to complete some investigations of your own, as this could reveal other evidence such as the occupier has another tenancy that they have been residing at, but send all of their post to a family members address!

If the occupier succeeds, be it by statute or tenancy agreement, then you will need to consider whether the Property is more extensive than is reasonably required for them i.e too many bedrooms and if so, whether, if suitable accommodation could be offered, you are within time to seek possession under Schedule 2 of the Housing Act 1985, Ground 15A. This ground does not apply to spouses or civil partners.

If the occupier does not succeed to the tenancy, and you have informed the occupier of the reasons for refusal in line with your policy, then you will need to think about serving a valid Notice to Quit on the Personal Representative of the deceased and the Public Trustee at the same time.

You must also comply with the pre-action protocol for social landlords by ‘writing to the occupants explaining why it currently intends to seek possession and requiring the occupants, within a specified time, to notify the landlord in writing of any personal circumstances or other matters which they wish to have taken into account. In appropriate cases, such a letter could accompany any notice to quit or notice seeking possession and so would not necessarily delay the issue of proceedings; and (b) should consider any representations received and, if [you] decide to proceed with a claim for possession, give brief written reasons for doing so.’

Succession means one person being entitled to something when another’s entitlement ends.

On the death of a tenant it is possible for another party to succeed to the tenant’s secure tenancy.

For tenancies that began before 1 April 2012

For tenancies that began on or after 1 April 2012

Succession is limited to the deceased tenant’s spouse/civil partner or cohabitee unless the tenancy agreement expressly allows for someone else to succeed.

To succeed, the party must have been occupying the property as their only or principal home at the time of the death of the tenant.

Section 18 of the Law of Property (Miscellaneous Provisions) Act 1994 sets out the rules for sufficient service of a Notice to Quit when a tenant has passed away.

“Section 18 of the Law of Property (Miscellaneous Provisions) Act 1994

In practice it appears to be a common occurrence that landlords fail to serve the Notice of Quit on both the Personal Representatives of the deceased and the Public Trustee or, if they do, they fail to serve the notices at the same time.

As seen from the case summaries below, failure to comply with the rules of sufficient service can result in a lack of clarity as to the date of determination of the tenancy.  If a Notice to Quit fails to meet the common law requirement of clarity to the reasonable recipient it is not considered to be valid and whole claim will be dismissed.

The Council had let premises to Mrs Henry.  Mrs Henry died intestate and the Council took the view that there had not been a statutory succession.  Therefore, they sought to end the continuing unprotected contractual tenancy.

The Council served a Notice to Quit addressed to the Personal Representatives of Mrs Henry at her former home.  The Notice to Quit had been expressed to expire on 1 June 2014 or the day on which a complete period of the tenancy expired next after 28 days from the service of the Notice (the ‘saving clause’).

A copy of the Notice to Quit was eventually served on the Public Trustee after a delay of some 17 months.

The Council brought a claim for possession based on having validly served a Notice to Quit.

The prospective successor of Mrs Henry defended the claim on the basis that the Notice to Quit was not valid because it had not been delivered to the Public Trustee until long after the date stated in the notice or the date calculated from the date of service at the premises by operation of the ‘saving clause’.

The Council’s possession claim was dismissed.

Mr Pavey died in August 2014.   The Council took the view that there was no person qualified to succeed Mr Pavey’s tenancy and therefore sought to end the continuing contractual tenancy of the premises.

On 19 December 2014, a housing officer delivered to the property a document, described in its header as a Notice to Quit, which was addressed to the Personal Representative of Mr Pavey.  The date of delivery up was stated as follows: ‘On Sunday 18 January 2015, or the day on which a complete period of your tenancy expires next after 4 weeks from the service of this notice [the ‘saving clause’]’.

On 24 April 2015, the housing officer sent a copy of the Notice to Quit to the Public Trustee.

The Council’s possession proceedings were issued on 28 September 2016.  As the second defendant, the son of Mr Pavey, put in a defence noting that ‘the Claimant [the Council] is put to strict proof concerning the validity of the Notices to Quit’ it was directed that there should be hearing to address this preliminary issue.

The Defendants appealed this judgment on the basis that the judge was wrong to find that the Claimant had given an effective Notice to Quit as the notice did not inform its addressee of the date on which the claimant purported to end the tenancy.  The Defendants argued that it is well settled as a matter of law that a Notice to Quit must be clear as to the date on which it determines the tenancy.

The appeal took place in November 2017.  The judge established that as the twofold service method required was not fulfilled until after the date expressly stated in the Notice to Quit (18 January 2015) the notice could only be valid if the ‘saving clause’ saved it.  However, the judge found that the date of the determination of the tenancy could be understood to be a different date in the hands of each of the two recipients.

The judge ruled that the Notice to Quit failed on the test of validity for a lack of clarity as the recipient of it, when the notice was delivered, could not reasonably understand from the Notice the date on which the tenancy was to conclude by operation of the ‘saving clause’.

As there are multiple factors to consider upon the passing of a tenant (and time limits to consider if there is a succession but the property is too extensive), these types of cases need you to act efficiently, carefully and compassionately, upon notice of the death. Careful consideration should be taken in relation to the occupier’s circumstances, the tenancy agreement, succession policy, pre-action protocol and statute law as summarised above. In relation to procedure, the common mistake of serving a Notice to Quit at different times to the Personal Representative and Public Trustee must be avoided at all costs.

If you have any enquiries regarding any matters arising from this article, please contact Erika Barnett, Housing Management solicitor of Prince Evans Solicitors LLP, on 020 8799 1894 who would be happy to discuss.

Coronavirus : Is it time to start thinking about making Lasting Powers of Attorney?